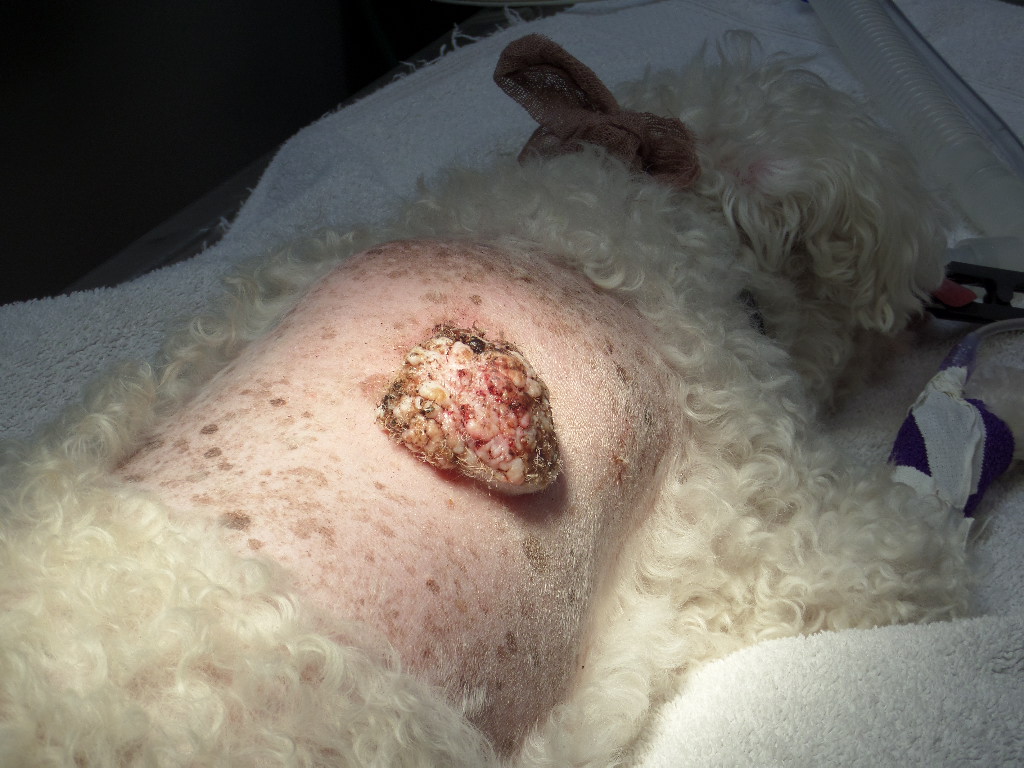 Poodle-Like Dog came in because the gigantic cutaneous mass on his back started to bleed.  According to Mr. Owner the mass has been there “for years.”   “He started scratching at it,” Mr. O said.

Here is a description of the procedure from start to finish:

We generated a surgical treatment plan and discussed this with Mr. O.  Included were pre-anesthetic diagnostics – a General Health Blood Profile (serum chemistry panel and CBC) and chest x-rays.  The purpose of the blood panel is to assess organ functions, red blood cells, white blood cells, and platelets, to assess for anything that might change the plan.  Chest x-rays are for assessing cardiovascular structures and lungs, again for anything that might change the plan.

The findings of the General Health Blood Profile were unremarkable.  Mr. O did not authorize the x-rays.  Radiographs were done two months prior, however, investigating a heart murmur.  These images were unremarkable.

Poodle-Like Dog was pre-medicated with Hydromorphone.  This is an opioid.  This provides tranquilization, analgesia, and reduces the amount of general anesthesia required.

About 20 minutes later, members of our technical staff placed an IV catheter.  We induced anesthesia with Propofol, placed an endotracheal tube to deliver isoflurane gas anesthesia and oxygen.  PLD’s eyes were lubricated with sterile ophthalmic lubricant.  This is important, because animals do not blink during anesthesia, and the eyes will become dry otherwise.

The mass itself had the appearance of a super-sized sebaceous adenoma.  These are cystic cutaneous growths that look like warts.  PLD’s mass looked like this, but 100-times the size.

The surgical area was clipped with Andis clippers and a number 40 blade.  Hair is removed to eliminate contaminants and so the skin can be scrubbed with antiseptics.  Anesthetic induction and the haircut are done in the non-sterile treatment area.

Assistants gave an IV injection of cefazolin, an antibiotic, and started an IV drip of lactated Ringer’s solution.

Once the mass was out of the way, off to the side in my surgery pack, I checked for bleeders.  Any veins or arteries that are bleeding to any extent need to be ligated.  Usually, ligation involves a ligature of absorbable suture material.  Occasionally, I use electrocaudery for hemostasis.  In PLD’s case there were no bleeders.  Regardless, I was prepared.

The surgical site was flushed a couple of times with normal saline solution.  This is to remove hair, debris, or other contaminants that may have entered the surgical wound.  Despite the pre-surgical clipping of hair and the pre-surgical scrub, it seems there is always some little, tiny piece of hair you can see, just before closing the wound.  Anyway, the saline takes care of this.

This wound was closed in two layers.  The first, using 3-0 one-cryl (poliglecaprone 25) suture with a taper needle, I closed the subcutaneous layer.  The suture pattern was simple interrupted with the knots buried.  This means the first bite is deep, the next bite is subcuticular (under the skin) on the one side, the next bite is subcuticular on the other side, and the last bite is again deep.  Suture ends are tied with a square knot in four throws.  As one of my UC Davis surgical professors said way back when, “If you can tie a square knot, you can do anything.”  I used 3-0 nylon to close the skin layer and appose skin edges.  I used a combo pattern of simple interrupted and cruciate.  I did this so the skin edges would meet as precisely as possible.

Poliglecaprone 25 is and absorbable suture.  It maintains 70 percent of its tensile strength for seven days.  It maintains 50 percent for twenty-one days.  You may be able to feel the sutures in place for about a month.  I like to use small gauge suture, because it causes less tissue damage and scarring.  3-0 is relatively small, 2-0 is larger, and the largest we have is 0.  And I like to use taper needles on delicate tissues, because these needles cause less damage and result in better healing.

Nylon suture is not absorbable.  It is attached to a cutting needle.  This needle needs to cut through tough skin.  I like small gauge here for the same reasons, but you need to take into account skin tension and how likely your patient is to try to self-remove sutures.   Typically, we remove skin sutures two weeks after surgery.

In the end Mr. O did not authorize biopsy of the mass.  We will never know for sure what it was.  I will likely always recall this as the Super-Size Sebaceous Adenoma.  I will not recall this, however, as Big Tumor Little Dog, because I have seen littler dogs with bigger tumors.