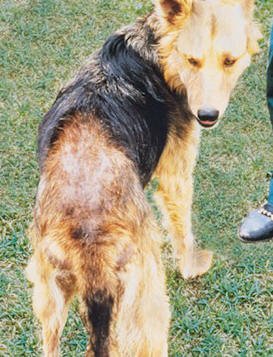 How I do allergy testing

“He’s never had allergies before.”

Allergy testing is indicated for patients who are over a year old, on good flea control, and who have symptoms more than a seasonal basis.  Symptoms of allergic skin disease include:  excessive licking, scratching, chewing; hair loss; excoriations or scabs on the skin; and evidence of pyoderma (skin infection) – surface or deep.  Mostly, recurrent ear infections also relate to allergies.

In San Diego, seasonal allergies may happen once or twice a year.  When a dog or cat has symptoms on this schedule, symptomatic treatment is appropriate.  And, just so you know, these allergies are not histamine-driven, so antihistamines do not help.

“Can’t I just give him Benadryl?”

The allergy test we offer is a blood test.  A blood sample is submitted to the lab.  Serum levels of IgE antibodies are measured.  IgE antibodies bind the allergens to start the inflammatory reactions and the allergic process within the skin.

The allergens tested include:  molds/fungi, such as Aspergillus; grasses, such as Bermuda; trees, such as eucalyptus; weeds, such as ragweed; dust mites, such as D. farinae; and storage mites.  Allergy testing is not accurate for diagnosing food allergy.

“Is he allergic to corn?”

The benefits of serum blood testing are that it is relatively inexpensive, no special equipment or extracts are required, the patients do no need sedation or tranquilization, nor do they need their hair clipped.  The downside is that some patients do not produce sufficient IgE antibodies to yield usable results.  This is especially true of younger patients.  This is why I do not allergy test dogs or cats less than one-year-old.  And most often I will wait until they are at least two.

Allergy test results are reported as a number score for each allergen tested.  A score above a threshold is consistent with the potential for allergic reactions to that allergen.

Once a significant IgE score for a particular allergen is identified, the first approach is to eliminate exposure to that allergen.  One time I allergy tested a dog.  The dog’s results suggested allergy to cedar.  The dog slept on a cedar dog bed.  We removed the cedar dog bed.  Easy fix.

Most often, however, the allergens are things nobody can control, like palm tree pollen for example.  And quite often, patients reacting to one allergen are reacting to a multitude of allergens.  These patients are candidates for desensitization therapy, which is also called immunotherapy.

The lab makes extracts of the allergens, based on the significant reactions.  These extracts are then administered to the patient on a pre-determined schedule.  The route of administration may be oral, wherein a measured amount of the treatment set is applied to the inside of the mouth, either under the tongue or between the cheek and gum.  Or, the route of administration may be subcutaneous (under-the-skin) injection.  We go with oral, because conceptually it is easier for the owners, and I do not need to teach the owners anything special to do it.  And, in the end, if it is easy, it is likelier to happen.